We’ve been pretty quiet over here at Normal. We’re about to announce some cool stuff, but in the meantime, I wanted to put together a quick write-up about Oculus Quest.

Last week Oculus announced Oculus Quest. A $399 standalone VR headset with room-scale head and hands tracking. As of right this moment, I believe Oculus Quest is the only VR headset you should care about as a developer.

It also happens to be the first headset I could see my parents wanting to use.

I started Normal with one singular goal, which was to build the app that would get my parents to use VR. That’s not to say I wanted to build apps for an older generation, but I knew if I found something my parents would use, it would be an elemental technology, applicable to almost everyone. I picture them buying a VR headset that they leave on their coffee table. A headset they would occasionally pick up to use this app.

I didn’t know what that app would be, but before I could start, I needed to figure out the hardware requirements. After building a few prototypes, I realized that the hardware needed to have minimum viable tracking, be priced affordably, and function standalone.

For those of you not familiar with Normal, I wrote this on our about page two years ago. I think it captures the importance of minimum viable tracking:

Virtual Reality is compelling to me because it capitalizes on our sensory and motor skills. We’ve spent our whole lives developing these skills and (up until now) our digital devices haven’t taken advantage of that. With hand controllers, we can complete that feedback loop. VR without hand controllers is like living in the real world with your hands tied behind your back. Most of us have hands and are pretty good at using them, so I think it’s fair to say VR without hands is going to be a waste. (I know not everyone will agree with this and that’s fine. You do you.) I want to build for a world where room-scale VR with hand controllers is the norm, because I believe that one day it will be.

If your VR headset is tethered to a large, clunky, & stationary computer, then you’ve already lost. A $1500 mega-computer might be ok if you’re targeting gamers / cryptocurrency folks, but you’ll be limited to the size of that demographic, which is pretty small, and certainly doesn’t include my parents or the coffee table they’re gonna put this thing on.

A stationary computer also means that a VR user’s movements will be limited to a desk. While this works for the desktop PC gamers, it’s going to be important that this device can be used anywhere in order to be accessible to everyone. I expect most people will want the mobility that a device like an iPad provides—you can stand up, sit down, or bring it with you anywhere in your house.

Packing the computer part into a standalone headset presents technical problems that have predictable solutions. Computers get smaller and smaller over time, so to solve that problem we just need to wait. However, on top of that, we also have to consider how much utility a device provides. 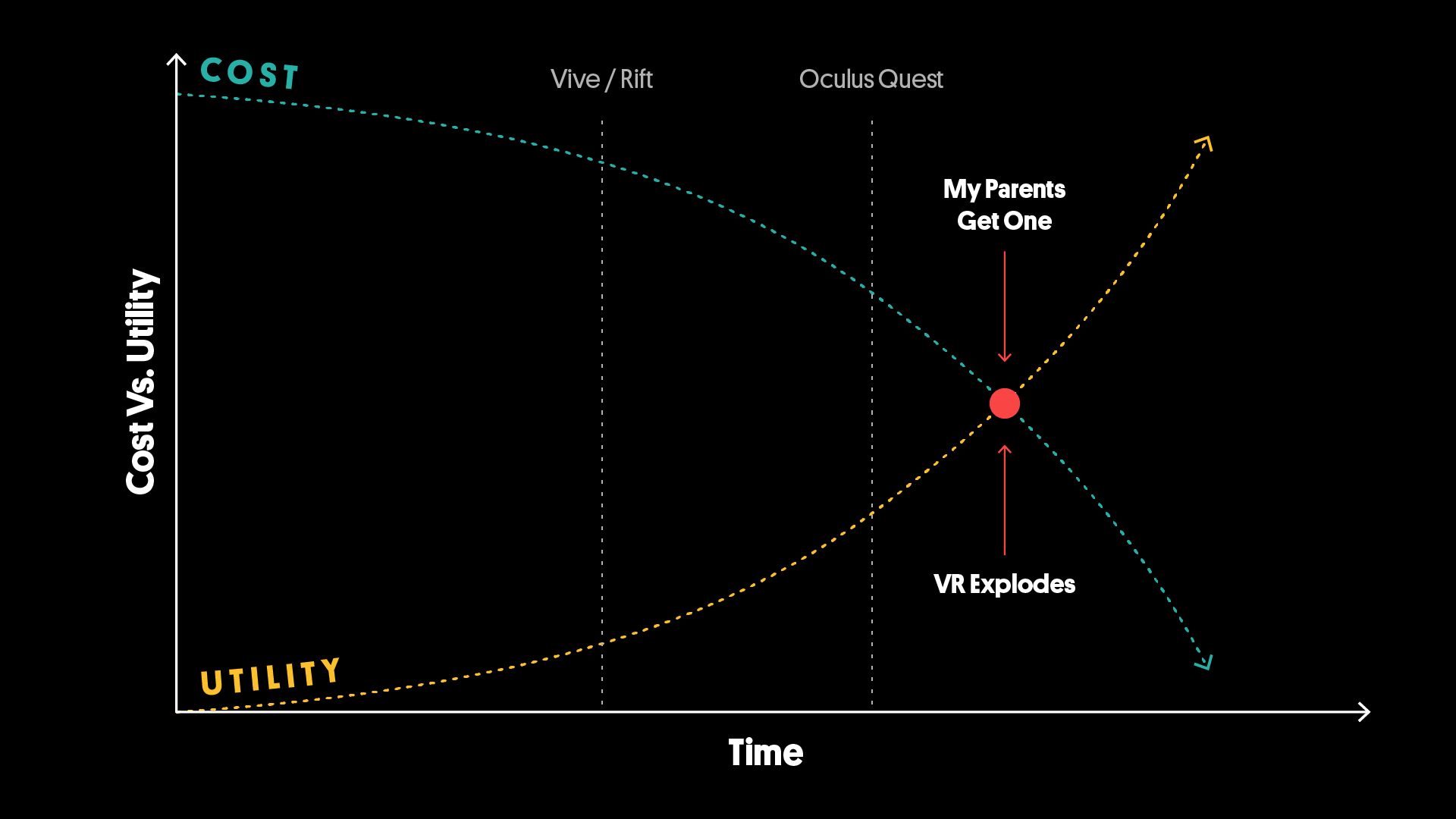 I kind of imagine a graph like this in my head. Whenever a new technology is created, it’s very expensive, and it doesn’t provide a lot of utility. However, over time, the hardware gets cheaper to manufacture, and the software gets better and provides more utility. Sometimes cost moves faster than utility or vice versa. I’d imagine if VR hardware suddenly became $1, everyone would have a VR headset even if it doesn’t do all that much. If someone made a VR app that could cure cancer, people would be willing to pay the $2000 it costs to get a room-scale VR headset, all of the sensors, and a gaming PC to go along with it.

That said, with most new hardware, that sweet spot usually happens in the middle. It’s when the hardware gets cheap enough, and the software gets good enough that the amount you spend on a headset is equal to the value it will provide. A side-effect of this is that first generation is primarily bought by early adopters/people with more expendable income, but with each new generation the price becomes more accessible and the utility increases until it’s something almost everyone can justify buying. This is when the gold-rush starts, and the market for that device explodes.

For me, Oculus Quest is the first headset with all of the necessary ingredients, and I think Oculus knows this. $399 is an insane price for the amount of technology Oculus has packed into this headset. Which leads me to believe that the only reason this headset exists at this lower price point, is because Oculus is heavily subsidizing the cost of Quest in order to hit that sweet spot between cost and utility that I mentioned above. Oculus Quest might end up being accessible to a large number of people who will get more value than what it actually costs to buy the product. In other words, this is the best bang for your buck.

Why is Oculus Quest the only VR headset I should care about?

Let’s say you could go back in time to January 2007 and get in on the app gold rush before it started. You’re going to build a ride-sharing app (hopefully with a proper HR department this time). If I had to guess, you’re probably not going to target the Blackberry, Motorola RAZR, or any of those Windows Mobile 6 phones. You’ll target the iPhone. It’s the device that introduced the entire-phone-is-a-touchscreen interface paradigm to the masses, and it’s the only one you would care about—at least until Android phones entered the market in the following year. I believe Oculus Quest is the iPhone of the VR industry. The iPhone marked the beginning of the slope of enlightenment for smartphones, just as I believe Oculus Quest will do the same for VR.

Minimum viable tracking, standalone functionality, and affordability put Oculus Quest into the same category as the original iPhone or original Macintosh for me. Now don’t get me wrong, both devices were less than ideal at launch. They were underpowered and had almost no 3rd party apps. I had the original iPhone, and everyone would say to me “You spent $600 on a phone?! My T9 keyboard phone is faster and it has 3G!”

As I mentioned earlier, when a new device is introduced, most people can’t justify the hefty price tag for the amount of utility they get out of it. That is, until app developers start creating apps. 3rd-party apps are what transformed the iPhone from just another cell phone into something we use almost everywhere and for almost everything. App developers are what increase the utility of any device.

Initially we can end up with a weird catch-22. Developers won’t make apps for a device until there are enough people using it. And people don’t want to buy this new device until it has enough apps / utility.

However, as devices become cheaper to manufacture, we hit a point where someone makes a device that has yet to change the world, but is still good enough to be bought by a large number of early adopters. Once that happens, developers start to join the ecosystem and something magnificent happens. 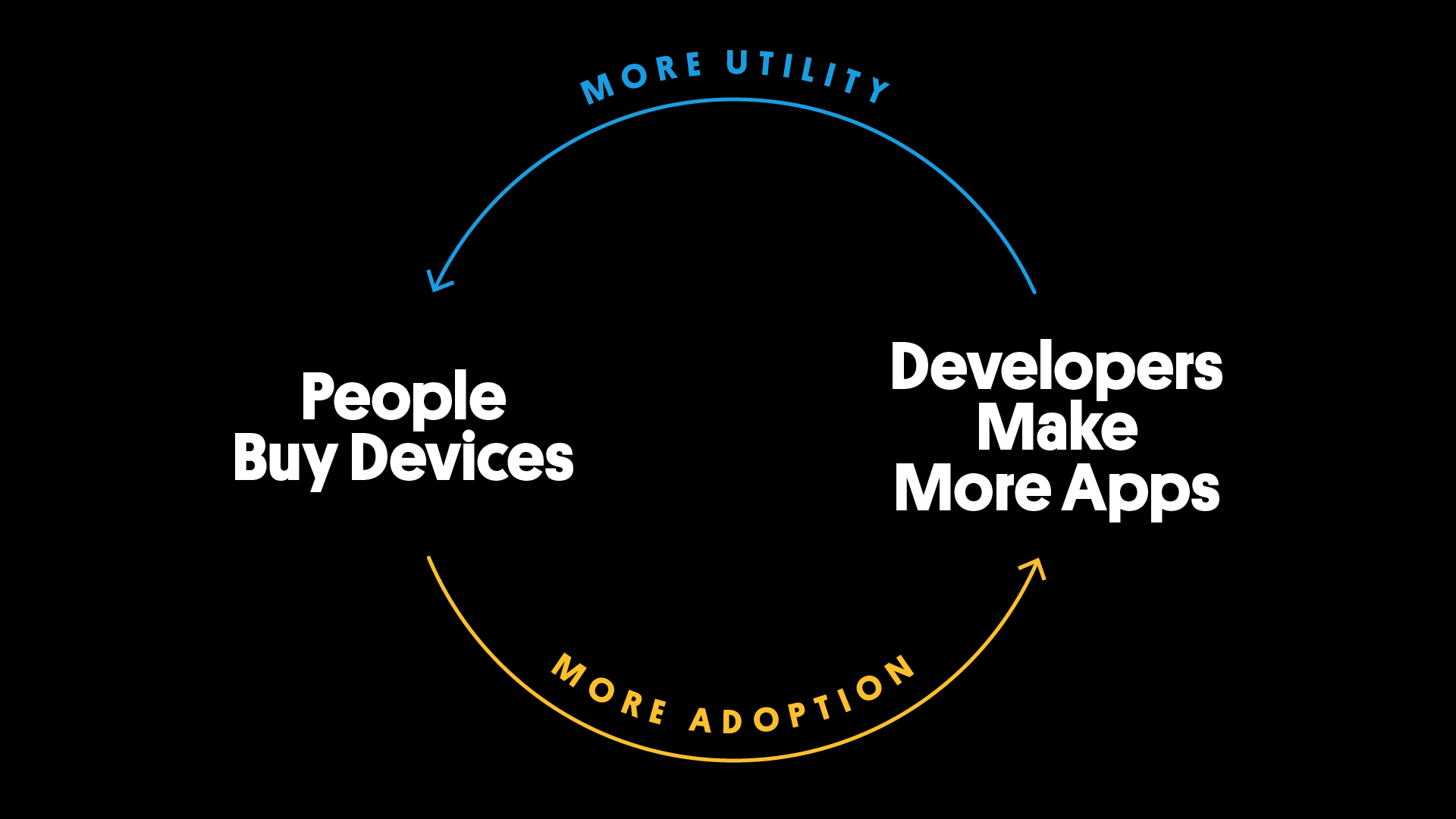 The utility of the device starts to skyrocket. Developers add utility by creating more apps, which leads more people to buy devices, which leads more developers to create even more apps; wash, rinse, repeat. Then what? The industry explodes and everyone talks about how they’ve got a hit app idea they need you to help them build. 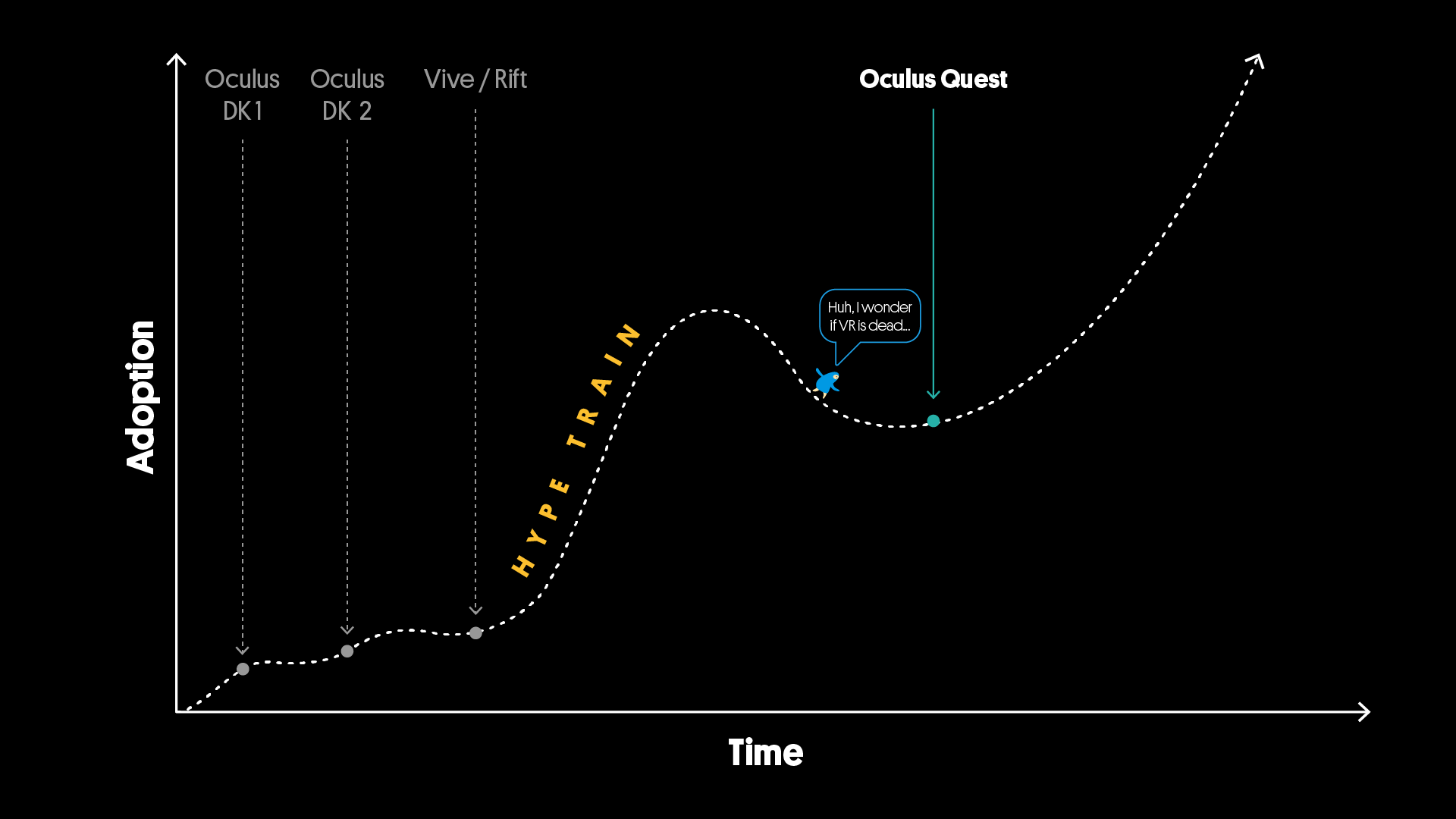 Oculus Quest will be the device that the early adopters get. It’s the device that hit app developers will make apps for and it’s the headset that will kick off the infinite loop of developers making apps -> more people buying devices -> more people making apps -> etc. Just like with VR today, people were hopeful, but skeptical, but if we could go back in time, we’d know that the iPhone was the only device worth targeting. I think that will be true for Oculus Quest, too.

Half + Half at the Brooklyn Academy of Music & MIT Reality Hack

Half + Half Starball Update

Half + Half Matchmaking Update

This site uses Akismet to reduce spam. Learn how your comment data is processed.